7 Things To Avoid When Writing A Letter of Recommendation 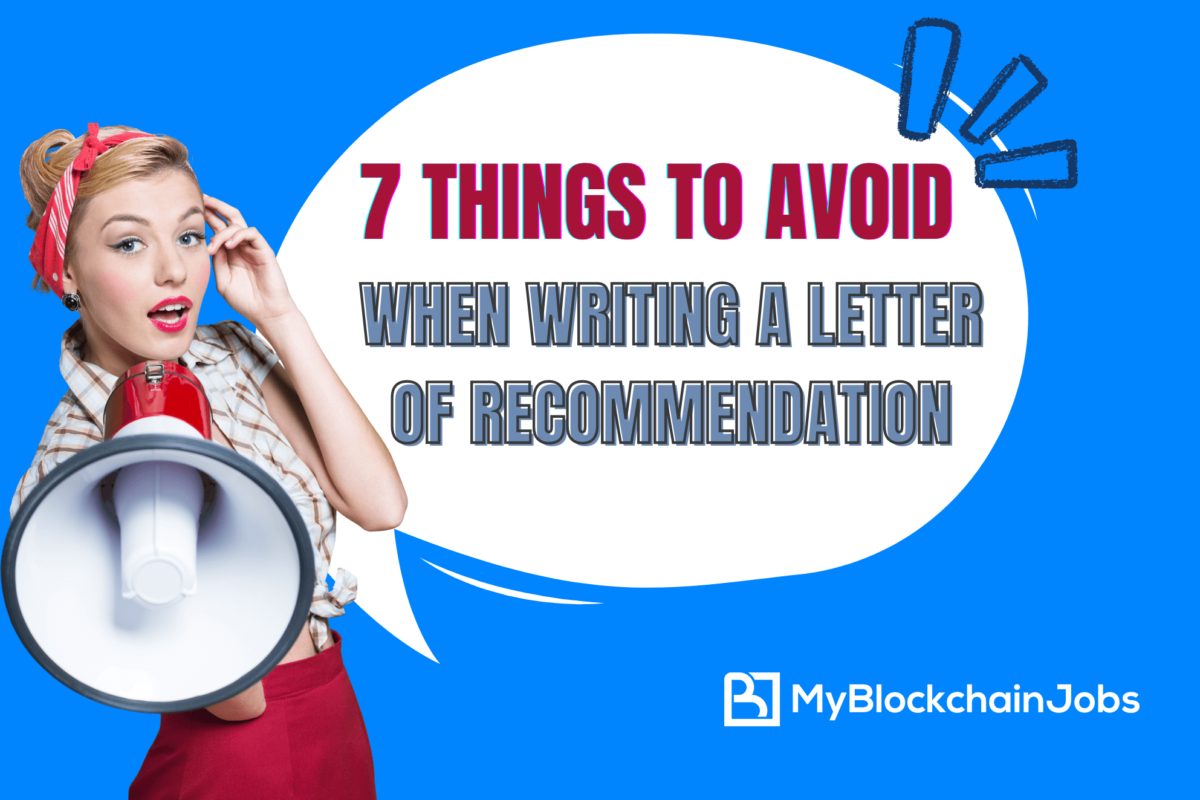 Top 7 Mistakes To Avoid While Writing A Letter of Recommendation

While it is tempting to use general language, vague generalizations and ready to use generic letters that are easily formatted and customized with a few clicks, such letters can do more harm than good. An example of this would be, “John is a hardworking employee and has excelled at his professional tasks without a doubt.”

A good letter of recommendation will always specify details about certain traits and qualities of the candidate that set him apart from other students, and/or employees. A good letter will be personalized and will take some amount of time to draft as it is well thought out. A great letter of recommendation will use clear and concise points and doesn’t include lax, casual language.

An example of a good recommendation would be, “John is an exemplary employee who has gone the extra mile by chasing leads in his own time and has in turn successfully managed to increase revenues by over double his yearly quota in the fiscal year of 2020 to 2021.” While the specificity of the details can vary, while writing a letter of recommendation, remember to always stay on point and put yourself in the reader’s shoes.

Both faint praise and subtly worded exaggerations have the same effect. They make the employer think twice about hiring the candidate. This is especially true for backhanded praises and exaggerations that are reaching to make the employee sound better than he actually is. An example of faint praise and backhanded praise would be, “Without being asked John offered to mentor new employees, and as a result made a positive impression on the minds of others.”

A good letter would use genuine compliments worded in a professional manner. An example of this would be, “John has taken the needed time and efforts to coach, mentor and train new employees. He has taken on this initiative with a positive spirit and has helped better the work output of the new employees that he mentored successfully.

While a good letter offers basic information as a ground for application, avoid focusing on applauding the candidate for basic skills such as grammar, punctuation and being hard working. These skills while desired can be mentioned in a single line at most. An example of this would be, “John was punctual and always came to work on time, he did not forget to clock in and clock out every day, he took timely breaks and ensured to inform his supervisors before clocking out every day.”

A good letter of recommendation will mention the specialized skills and hidden talents of the applicant. An example of this would be, “In all the new employees hired in the last year, John was at the top 3% quota of the training batch, he has shown the needed drive to perform under pressure and he displayed perfect discipline, work ethics and punctuality.

As far as possible keep the introduction of how you met the applicant and your personal relationship to a minimum and keep the content relevant. Do not completely exempt this fact, but keep the content to a maximum of two lines. An example of this would be, “John was my employee for the last 2 years, for the entire duration John had a great sense of humour and would make everyone laugh while at work. While John was a man who loved to make others laugh and there were days when we all needed this, John also displayed excellence at work.

A good letter will focus more on professional points, with if applicable only in certain cases a hint of personal anecdotes. An example of this would be, “John was employed by our firm for 2 years and during this tenure, he displayed the perfect work and personal life balance. John ensured to motivate his co-workers through hard work, he displayed a can-do attitude, and he always led by example.”

While writing a letter of recommendation for a student or past employee, most professionals jump to the end as they do not know where to begin! The answer is simple, start with the basics, and slowly work your way to the top. An example of jumping to the end would be, “John worked with the firm for 2 years and he completed all his professional duties on time. John was an exemplary example and any company would be lucky to have him.

A good letter would consist of at least 4 paragraphs that would consist of an introduction of how you know the candidate, how efficiently he performed at work, how he was an all-rounder candidate, his specializations and skills related to the tasks, information about any extracurricular activities he performed while on the job and specific reasons he would add value to any company that would hire him.

Every employer would like to hire candidates who have merits and may have won accolades. Skipping this section can be detrimental to the goals of writing a letter of recommendation. An example of skipping information would be, “John performed all official tasks with ease and was a valuable employee.”

A good letter of recommendation would mention 2 or 3 accolades and merits if applicable. An example of this would be, “John took the needed time to research every topic that was given to him as part of the project and as a result, he won the best performer award for the years 2020 to 2021. John also made a significant impact on the minds of other employees with this spirit to achieve and exceed the expectations of the clients.”

Most employers and professors keep creating letters of recommendation as a last-minute and rushed task. If you have a deadline to give the letter to a student or a former employee, then keep at least 24 hours aside. While 24 hours might seem like a lot of time to spend creating a letter to recommend someone, remember that each letter is personal and has to be customized. 24 hours will allow you to not only create the first draft but also the final draft as well as perfect the final draft.

Are You Stumped For Words and Short On Time?
If you have a letter of recommendation to write and you are stumped on words and short on time, then don’t fret just as yet. We can help you create a truly heartfelt, professional and enriching letter. Contact us to know more today!